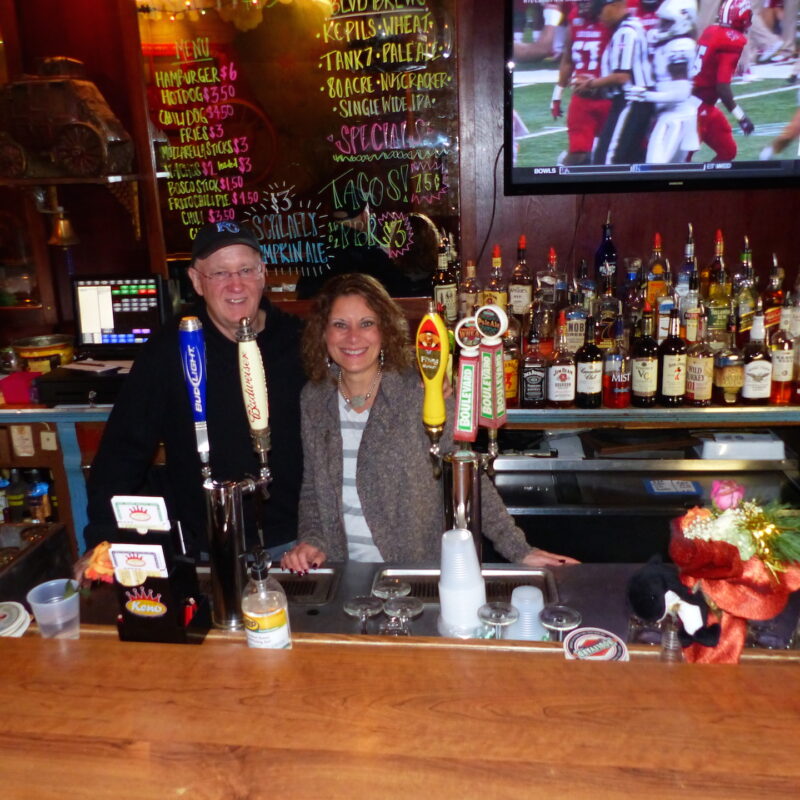 Dave’s Stagecoach Inn is a Westport icon. It has TVs, a pool table, a jukebox, Missouri Lottery Keno and Scratcher tickets and an outdoor patio, Dave’s Stagecoach Inn offers a relaxed atmosphere to catch a sporting event or gather with friends and family! Because it’s an old-school, cherished KC dive bar, Dave’s is open every day until 3:00 a.m.

When you visit Dave’s Stagecoach Inn, park on the east side and come in through the rear. It’s standard protocol for dive regulars. Even Martin Sheen, Tiny Tim, Elvis Grbac, and Charlie Wheeler were wise to the back door.

It would be a shame for you to enter through the prison-worthy front door and immediately be marked as a newbie. Outer appearances aside, the people inside are kittens. Drop by and meet Lori, the sharp-witted manager; Shastyn, the dreadlocked barkeep; and Jim Hess, the Black Belt husband of second-generation owner Joyce Hess. And don’t forget to give third-generation owner Kate a fat tip. Kate is a kindergarten teacher by day and, by night, a bar vixen, cuter than Taylor Swift by far.

Son of a Jewish immigrant, David Golad opened Dave’s in 1952, against the advice of the anti-Semitic property owner who told Dave he would fail.  This wisecracker didn’t know Dave’s heart and work ethic, and we hope he’s choking on his words in his grave.

The legendary bar’s fate was tested in 2012 when Jim had a triple bypass and had to take six months off to recover. However, Kate felt closing her grandfather’s bar would be sacrilegious. So she grabbed the helm and persuaded her parents to bring the bar into the present century.

Every multi-generation dive deserves a facelift once every six decades.

Jim and Joyce Hess forge on at Dave’s Stagecoach Inn as second-generation owners.

As part of the remodel, Dave’s added four flat-screen TVs and new lighting, and replaced the rickety table chairs. Large mirrors and a point-of-sale system were installed to keep patrons honest on their tabs and bartenders in check on their pours.

Dave’s Stagecoach has been lovingly called Dave’s Cockroach Inn, and “the last stop before Alcoholics Anonymous.”

Foodies, this isn’t your stop, but if you want something to nosh on for cheap, you can order hotdogs, burgers, or fries for under $6. If you’re really tapped, you can order a Bosco stick (a breadstick stuffed with garlic and cheese, with marina sauce for dipping). Or order cheap tacos on Wednesdays or Saturdays.

The kitchen is an anomaly. It’s tucked behind a half wall near the rarely used front door. The grill is no bigger than one you’d use at a campsite, but Lori still can turn out the bar food staples necessary to keep patrons sitting upright. The nine-item bill of fare is taped on the front of a white refrigerator. Why waste money on menus?

You can get your game on at Dave’s, which sports a pool table, pinball machine, jukebox, Powerball, and Keno machine. The days of “jukebox roulette,” when free drinks were poured for naming obscure songs, are gone. Today DJs spin music on Honky-tonk Tuesdays or Garage Band Wednesdays. They also occasionally share events on their Facebook page.

Other nights Dave’s cultured, tattooed, and the trendy crowd can have their way with the diverse tunes on the juke. Music becomes background noise during the day. Other than the juke, all you’ll hear during the day is old-timers drop in to chew the fat with their favorite bartender.

Rock-bottom price is Dave’s 65-year specialty. The Pitch named the dive the Best Cheap Place to Take Your Thirsty Self in 2014.

Not every wall needs a Picasso or Matisse. Being the ultimate environment for nonconformity, Dave’s purchased art for the crusty and dusty. In recognition of Westport’s wagon-outfitting history, a 17 ft. x 17 ft. stagecoach mural was commissioned. University of Kansas graduate Carl Martin Jr. Martin painted the fresco in 1977, trading his artistic work for beer.

Golad, the late owner of Dave’s Stagecoach, began working as a paperboy and then decided to become a barkeep, because every time he passed a pub during his route, he only saw happy people inside.

Dave and his wife, Sonia, moved from Iowa to Kansas City to experience the great American dream of business ownership.

Dave first started working at Fox’s Tavern at 18th and Vine to learn the bar business. In 1952 he found a prime spot in Westport to strike out on his own.

At the time, Meierhoff’s and Kelly’s were the only other pubs in business. Today you can buy a drink in more than 30 Westport bars and restaurants, but only Dave’s and Kelly’s can share the bar and business stories that helped shape the Westport entertainment district for six centuries and counting.

Dave’s 423 Club operated just blocks east of its current location for 20 years. That is until its lease wasn’t renewed in the 70s because of the redevelopment of Westport. Dave quickly disassembled his 40 x 14 ft. European bar and mantle quietly wheeled it down the middle of the street, and popped it into its current location at 316 Westport Road, a former machine shop, without missing a beat.

Keeping with his trailblazing ways, Dave was the first business to be issued a lottery license in Kansas City, in 1986. People lined up for blocks to buy up to 500 tickets at a time at Dave’s Stagecoach.

Then the lines stopped. In 2008 the Missouri smoking ban passed; the lines to Dave’s turned to tumbleweeds. Dave’s lost 40 percent of the bar’s business overnight but prevailed by building a smoker’s patio and securing a 3 a.m. liquor license, which frequently generated more revenue in two hours than the 14 hours prior.

Before debit and credit cards become the norm, Dave kept a record of everyone’s bar tab in a spiral notebook that never left his side. One night, his blood pressure spiked when he thought he lost the tab book, which he later found on top of his car, surviving a 10-mile commute home.

When tabs started hitting the point of ridiculous, Jim put up a wipe board that he labeled Dave’s Deadbeats to shame customers into paying down their tabs. Other than a few customers dying prior to settling up, most patrons paid up to avoid the humiliation.

Today’s younger crowd pays for their bloody’s and beer with fantastic plastic rather than cash. They leave full of humility and happy that their favorite neighborhood bar remains a staple in their lives.