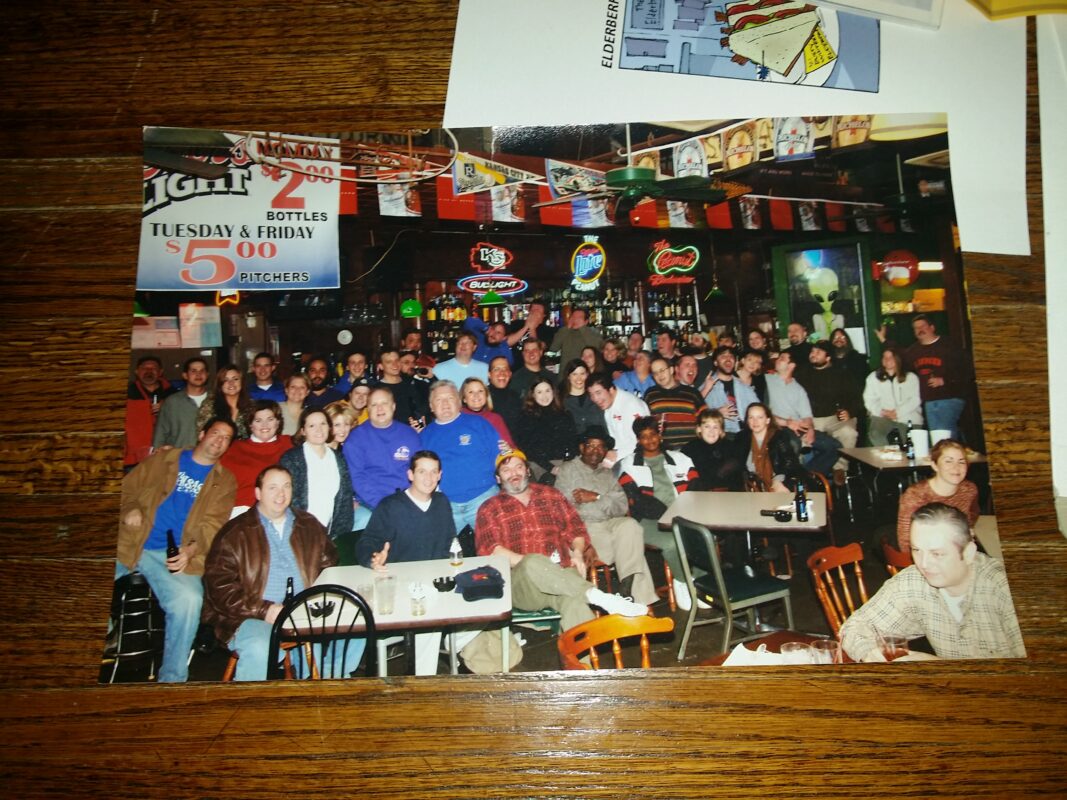 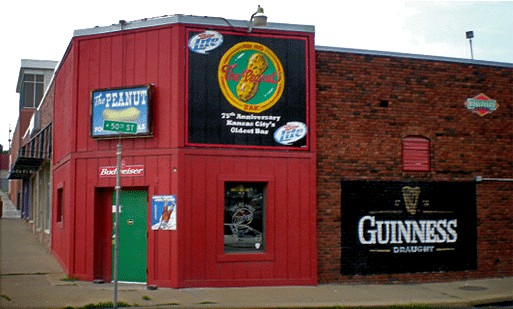 Tiny in size and mighty in volume best describes The Peanut Kansas City located at 50th and Main. About the size of a shotgun house, it’s the beer, not the breeze, that flows in the front door and out the rear (where the bathrooms are located) of this KC hot spot.

A Beer and Foodie Lover Kind of Place

Maybe it’s because you have to wait 20 to 30 minutes for your wings (this ain’t fast food, darling), so you end up downing an extra pint or two. The food is worth the wait, which explains why some visitors to Kansas City make the Peanut their first stop before they even drop their luggage off at their hotel.

Enjoy a cold one and the wacky memorabilia on the walls while your food cooks. Wall décor ranges from a scary black Santa portrait that seems to watch your every move to old Milgram’s signage from a neighborhood grocer that sold out to Wetterau Foods in 1984. And we can’t forget the mixed match chairs—simply a cheap solution for countless women who get lit and puncture the chair upholstery with their heels while preparing for their table dance. Debauchery!

The former owner, and late Rich Kenny, was the cantankerous yet endearing curmudgeon whose pithy demeanor helped him grow the oldest bar in Kansas City into a small franchise of bars. His franchise includes the Peanut’s upscale brother—the Cashew (now the Rockhill Grille).

The Nutcracker and Wings

Kenny, even according to his own son Aaron Whiteside, was downright mean at times. The polar opposite of Plaza venue customer etiquette rules, customers actually seemed to enjoy barbing with Kenny, even if it meant sacrificing a nut from time to time. Kenny sometimes showed his softer side when he broke bar rules and let women dance on the bar. “We only go around the mud hole once,” he’d say.

At the peak of his dreams, Kenny passed away from pancreatic cancer in 2007. Melinda, Kenny’s better half, now runs the Peanut(s) from her comfort zone—the kitchen.

As a former caterer, Melinda has created a menu that continues to earn the Peanut Kansas City awards, such as best bar food, best wings, and best dive bar in Kansas City. Melinda’s hard work in the kitchen, combined with her bartenders’ slinging and zinging on the front lines, keeps customers tied to The Peanut’s apron string.

On a joint account, the Peanuts sell 160 tons of wings a year. Whiteside, also a licensed Realtor and psychologist, woke up with the epiphany to start shipping wings to customers who couldn’t wait for a return visit to Kansas City. The Peanut Wings division of the business ships around 2,000 wings each Christmas and Super bowl, with demand continuing to grow.

The Peanut Kansas City and Hair of the Dog Sundays

Unlike Chez Charlie, The Piano Room, and Dave’s Stagecoach Inn, the Peanut is open on Sunday. And there’s nothing better to bring you back to life after an all-nighter than a round of Bloody Nuts and some spicy eggs, toast and bacon, French toast, or Eggs Benedict with Kansas City’s very own Wolferman’s English muffin ($8.75).  Grease, butter, and vodka soothe the savage liver.

Don’t bother asking for a job application at The Peanut. Hiring outsiders isn’t how this bar rolls. The Peanut and its crew choose its wait staff, kitchen crew, and bartenders based on who knows you, who can vouch for you, and move you to the top of the consideration list, assuming you’re a part of the Brookside Hillbillies.

Brookside is the neighborhood surrounding the Peanut where Kenny often cherry-picks college-educated kids who grew up together and remain tight. So tight they don’t let an outsider have much of a chance of getting in and so tight they rarely leave once on the Peanut payroll.

Bartender Randy Green started at the Peanut Kansas City 17 years ago. Tony Giblin started 20 years ago. T.J. Loundrug has worked at the Peanut for eight years and Alex Bryant for three. All four are Brookside Hillbillies, meaning they came from upper-middle-class families and are college-educated. So don’t let their gnarly bar image of tats, piercings, t-shirts, and ball caps make you think they’re counting pennies. They can easily make $150 in tips on a good night, and they don’t drive clunkers like Jed Clampett of the Beverly Hillbillies. They’re doing just fine.

The Peanut’s name is a tongue-in-cheek joke about being located downtown within a block of the priciest condos in Kansas City, The Walnuts. The Walnuts were built in 1929, with many units having higher annual property tax than what Kenny paid for the Peanut in 1981 (rumored to be around $20,000).

While the Walnuts still have butlers answering the front door, the Peanut remains true to its back-door, enter-who-may, and stay-if-you-pay mentality.

Kenny’s Cashew bar, at 20th and Grand in the Crossroads District of Kansas City moves up a social step. It caters to corporate types and lawyers who fly in from Sun Life, Lathrop & Gage, Polsinelli, Blue Cross Blue Shield, and other prestigious offices in the Crown Center area.

Kenny even had an even more upscale bar in the works for the Muehlebach Hotel called the Chestnut. Unfortunately, that deal didn’t come together before Kenny passed. The Muehlebach was bought by the Marriott Hotel, and Bar Central now occupies the bar space. It’s your standard upscale hotel bar where the staff turns over as often as a restless sleeper.

Back in the early ‘30s, you could get a bottle of beer at The Peanut Kansas City for .15 or a Gin Ricky or Slow Gin Fizz for .20. Better yet, try a Bloody Nut. It’s the Peanut’s hair of the dog patented remedy.

The Bloody Nut (aka Bloody Mary’s) is made with Zing mix and vodka. Depending on your bartender, you may get a weird blob of horseradish, celery salt, and Worcestershire sauce dumped in for an added kick.

Johnny Dare, Alex Smith, Keifer Sutherland, and Charlie Wheeler since 1982 and Walter Cronkite, Ernest Hemingway, and Hughes Rudd before 1933 when it was still a speakeasy