Get off your high horse and visit these 13 Kansas City dive bars. Buy a bucket of beer and ask the owner how he survived prohibition, competition and the pandemic. Stay until he finishes his story because the lessons may change your life and sure as hell should change your work ethic.

Most dive bars don’t come and go. They throw a gauntlet down and refuse to budge even if corporate franchises like Hooters or Tanners move in on their turf.

If dive bars were stray cats, their fur would be clotted and they might be missing an eye, but you’d still fall in love with them.

Kansas City was listed the 4th most dive bar saturated city in the US in 2014 by Travel and Leisure for a reason. We protect our cherished neighborhood corner bars, sports bars and dive bars like our own 401K.

The bars and pubs listed below are open and have been for the past 50 to 80 years. (APPLAUSE).

There are some older dive bars and pubs out there – O’Malley’s in Weston, Mo., and The Ship and the Golden Ox in Kansas City’s West Bottoms, but they didn’t make this list because of the continuity of operation factor.

Dive into this list with appreciation and an appetite to support these Kansas City dive bars for another century or two.

Tiny in size and mighty in volume best describes The Peanut at 50th and Main. About the size of a shotgun house, it’s the beer, not the breeze, that flows in the front door and out the rear where the bathrooms are located. 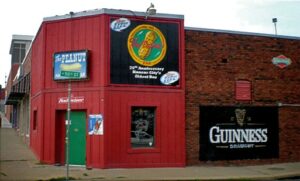 READ MORE ABOUT THE PEANUT HERE

An oyster bar in Kansas City? Bizarre, but true. Jimmy’s Jigger not only serves oysters, but at one time the bar had the largest Anheuser-Busch account in the Midwest. That’s when its original owner Jimmy Bowers was alive and a beer rep for Anheuser-Bush. 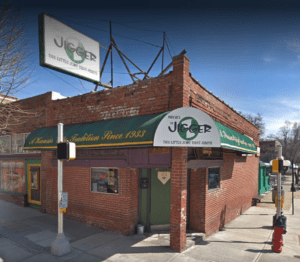 Located at the corner of 39th and State Line, this Kansas City dive bar has been known as the little joint that jumps since its doors opened in 1934. Unlike many dive bars in Kansas City that sell booze not food, Jimmy’s Jigger has a deep and hard-to-replicate menu. Jimmy’s serves Boudin Balls with Jambalaya and Yoodoo Crawfish Tails.

Jimmy’s bar backs to an adjoining restaurant in Kansas City called Jazz, which shares its chef and kitchen with Jimmy’s.

Johnnie’s on Seventh is named after Johnnie Baska, who founded the dive bar in 1934. Look up at the ceiling and you’ll see photos of famous men, who not coincidentally are all named John.

Currently, Johnnie’s ran by Chris O-Connor who is said to be kin to Johnnie Baska and very tall. Johnnie’s on Seventh is the only dive bar on our list located in Kansas City, KS (close to Strawberry Hill).

Twin City Tavern is low-key, divey and endearing. It’s owned by a set of twins — Kim Moffitt and her twin brother, Chris Hervey. The Midtown dive bar isn’t much to look, but has stood the test of time. 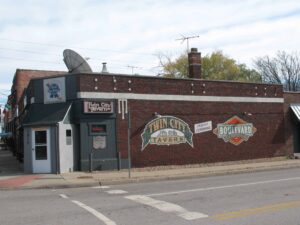 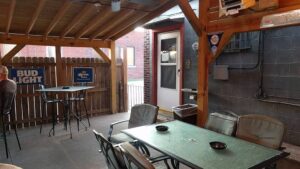 Soak up the beer with a serving of mac and cheese, cheese curds or cheese-covered nachos (see full menu).

No need to leave inebriated. If you’re alumni of the University of Central Missouri State, or not, drop by for a visit. Pay your respects to Old Drum, a bronze dog next to Old Barney’s and the Courthouse. Read the Old Drum’s claim to fame. 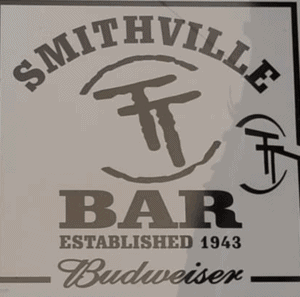 TT stands for Town Tavern, not titty bar, so get your mind out of the gutter. Smithville TT Bar has been serving the suds since 1943. Its customers often celebrate the four booziest holidays at Smithville TT — Halloween, Christmas, New Year’s Eve and St. Patricks.

Smithville TT Bar is located at 111 E. Main St., Smithville, Mo. Smithville is a lake town so prepare to hear talk about boating, fishing or darts while you’re there.

It’s one of the few neighborhood bars where dart tournaments still exist except for Chez Charlie (where steel tip darts are preferred).

The Quaff Bar & Grill is a favorite Kansas City neighborhood bar with a bar as long as its list of awards — 46 feet. However, it’s not the awards that fuel The Quaff’s endurance, it’s the heart of its second-generation owner, Joe Bonino.

Joe’s heart is huge. He’s walked women safely to their cars, loaned people money and worked relentlessly to make the average Joe feel at home in his bar.

Don’t get me wrong. Joe and his staff aren’t ones to gush or get giddy over anyone, especially athletes or musicians. That’s probably why George Brett, Puff Paddy, Rod Stewart and Jewel have thrown a few back at the Quaff at one time.

Drop by for a beer or jelly shot at 1010 Broadway, Kansas City, Mo. Tell Joe I sent you.

Kelly’s Westport Inn is an Irish watering hole deep in the heart of  Westport. Throwback your Irish Whiskey or pint seven days a week in the oldest building in Kansas City (erected 1850). Note:
The Peanut holds the oldest liquor license in Kansas City dating back to 1933.

Randal Kelly founded Kelly’s Westport Inn in 1947 in what once was a trading post for wagon trains. The Santa Fe, Oregon and California trails all ran down Westport Road at that time. Today Kelly’s Westport Inn bar stools have been graced by George Brett, Jamie Quirk and John Mayberry of the Kansas City Royals. Kelly’s is also a prime hangout during the Big 12 basketball tournament. Expect to see plenty of Iowa State fans there during the tourney.

When you visit Dave’s Stagecoach Inn, park on the east side and come in through the rear. It’s standard protocol for dive regulars. Even Martin Sheen, Tiny Tim, Elvis Grbac, and Charlie Wheeler were wise to the back door.

It would be a shame for you to enter through the prison-worthy front door and immediately be marked as a newbie. Outer appearances aside, the people inside are kittens. Drop by and meet Lori, the sharp-witted manager; Shastyn, the dreadlocked barkeep; and Jim Hess, the Black Belt husband of second-generation owner Joyce Hess. And don’t forget to give third-generation owner Kate a fat tip. Kate is a kindergarten teacher by day and, by night, a bar vixen, cuter than Taylor Swift by far.

Son of a Jewish immigrant, David Golad opened Dave’s in 1952, against the advice of the anti-Semitic property owner who told Dave he would fail.  This wisecracker didn’t know Dave’s heart and work ethic, and we hope he’s choking on his words in his grave.

The legendary bar’s fate was tested in 2012 when Jim had a triple bypass and had to take six months off to recover. However, Kate felt closing her grandfather’s bar would be sacrilegious. So she grabbed the helm and persuaded her parents to bring the bar into the present century.

You can huff and puff, but you can’t shut down The Westport Flea Market. It’s endured Hooter’s attempt to acquire it in 2006 and the Pandemic’s hard hit on it and the entire restaurant industry in 2020.

The Westport Flea Market’s hamburgers have won the best burger in Kansas City award 30 years straight 1986-2016). The secret ingredient is purchasing its meat from a local butcher and not cutting any corners. 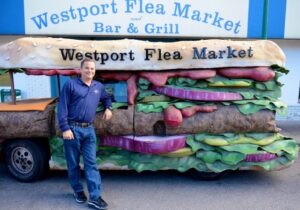 Choose one of 44 beers on tap, enjoy a burger, and feel part of the Kansas City community when you drop by “the Flea” as it is called in Kansas City. The Flea Market also serves salads, sandwiches, chicken and wings.

One of the next-most-popular items on the Flea Market menu is the Meatball Grinder, which was voted one of the two best in the country by The New York Times. The grinder is made with homemade meatballs with mozzarella cheese, topped with Joe Joe’s sauce, and comes on a hoagie roll, served with French fries and pasta salad.

The Blarney Stone is a historic dive bar in Kansas City, often serving at the starting place before watching the annual St. Pat’s Day Parade. It’s an inviting neighborhood bar blessed with generous bartenders, loyal patrons, cold beer, and stiff cocktails.
It was owned by Jim Fitzgerald and now is owned by Moe Mauzey. Mauzey used to own Chez Charlie and is co-owner of The Piano Room. You might call him our Dive Bar czar in Kansas City.
READ MORE ABOUT BLARNEY STONE

The one-mile track had Thoroughbred racing throughout the week and drew crowds of 20,000 in a single day. The Jockey Club draws almost as many beers each year with its loyal dive bar patrons. The little bar is open Monday – Saturday from 6 AM to 1:30 Am. Closed on Sundays.

Happy International Dive Bar Day! We couldn’t be prouder to have these bars serve us for life in and around Kansas City!

Please grab a copy of my Kansas City Dive Bar Bucket List as a to-go gift and subscribe for more places to go and see in Kansas City.