Drop the mic if you love a low-key gay and straight-friendly bar with high-caliber Kansas City vocalists who belong on Broadway. Cue the piano man at the Piano Room because this little dive bar takes center stage to fill the musical void in South Kansas City and has done so for more than 43 years.

This is the one place in Kansas City you don’t have to talk sports or weather. The conversations are had in song. If you haven’t been to the Piano Bar in south Kansas City’s Waldo area, you’re missing the real talent served raw.

This is a true piano bar. Not the crap that people seem to go nuts over in other cities. It’s a neighborhood bar, with an actual piano and piano player who has a repertoire so deep Piano Room customers have been returning for decades.
Jeremy, second-generation Piano Room Patron

Piano Room patrons close their eyes and sometimes weep while enjoying Broadway-quality vocals.  They come to have cheap drinks and listen to Heather Price, Brenda Smith, Alan Stribling and Ken Page belt out show tunes like they’re on Broadway. Actually, they’re on Wornall Road in South Kansas City where everyone is allowed to have a gay time as long as they don’t get crude as rumored happened back in the 70s when the bar was called Inge’s.

The Jazz Hall of Famer Dave McCubbin played at the Piano Room until he passed away in 2018. McCubbin’s gift was his bottomless repertoire of jazz, blues, pop, and rock songs. He played 95 percent of his 5,000-song list without sheet music.

Don’t let the plainness of the exterior put you off. The piano room creates music hotter than the food being picked up in the Strip’s Chicken or Waldo Pizza nearby.

The Piano Room’s obscure location makes the music inside even sweeter, and it’s delivered week after week for the price of a round of drinks. Expect to hear anything being sung from Cole Porter to Led Zeppelin. You’ll never be asked to pay a cover, so tip generously.

The bar is gay, straight and senior-friendly. It had a huge theatre crowd following in the 80s and 90s. Lots of old-timers swing by during the week for a drink, a cup of coffee or to gab with the staff.

On the weekends, LBGTQIA and straight people pack the Piano Room to drink and hear live vocals of songs dating from the 1920s to the 2020s. Memorize the words to Summer Wind, Coming in on a Wing and a Prayer, Wind Beneath My Wings, My Way, Send in the Clowns, and Chances Are before going.

From 1978 to 1999, Bill and Inge Walters owned the Piano Room (then called Inge’s Lounge). Those 21 years were the longest run of continuous bar ownership for a south Kansas City bar until the baton was passed to Dean Weiss in 1999.

Weiss had a riff with McCubbin, who quit and didn’t return as a featured artist until Klos and her business partner, Moe Mauzey, took back the Piano Room in 2006.

Co-owner Ginny Klos learned early in her career that she couldn’t stand the confines of an office. So she left her school position and started cocktail waitressing in the ‘80s at Milton’s Tap Room. It was there she fell in love with jazz. 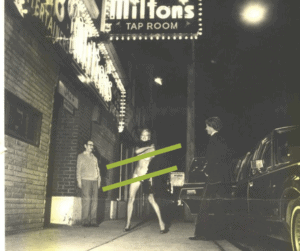 After Milton’s closed, she started working at Inge’s Lounge, until Dean Weiss took it over. She turned in her resignation to Weiss and moved on to D.B. Cooper’s for a nine-year stint. Graduating from bartender to bar owner, she bought Inge’s Lounge in 2006 and brought it back into the black with her partner Mauzey. Mauzey also owns The Blarney Stone and used to own Chez Charlie.

The Piano Room doesn’t serve food. It does allow you to bring your own food, order takeout at Waldo Pizza and enjoy it at the bar.

If you move into a regular status and befriend Ginny, she’ll give you access to the hot dishes she makes and serves in the back for select people. She loves feeding her friends and musicians and frequently brings spaghetti, casseroles, and chili.

Food aside, the Piano Room will satiate your appetite for jazz and great vocals.

It’s show-tune heaven and a gateway back to the music that mattered.

Mondays are Jazz night. Wednesdays are Open Mic Nights from 8 to 11 p.m. Thursday is trivia night. The owner and waitresses frequently put out food and chili free for the regulars, and several people have had their weddings and receptions in the lounge.

Karaoke was once a forbidden word in the Piano Room but it’s now on the menu on Tuesdays from 9 p.m. to close. Anyone who takes the mic is a singer worth listening to, and only Heather Price dons a headset, so she can jump in to raise the bar of vocal excellence upon the piano player’s cue.

“We call it singing and slinging,” says Price. “We continue washing glasses, mixing drinks, and ringing out tabs while we sing.”

The Piano Bar In a Nutshell