Join me in toasting the end of 2020 with the top 10 cocktails in the Midwest. Every cocktail has a backstory. With the help of Lonely Planet, here are the best cocktails to mix to ring in the New Year with ingredients representing states from Illinois to Wisconsin. Show your state pride and mix a hearty cocktail today.

Whether it’s Red Beer from Nebraska or Rye Whiskey in a Kansas Horsefeather, you’ll celebration will be off to the races.

Though not invented in the Windy City, this drink got its moniker from an 1880 Chicago Tribune clip and became solidified in cocktail culture by the Chicago bar Chapin & Gore.
What’s in it: bourbon or rye whiskey, Angostura bitters, 1 sugar cube (or a teaspoon of sugar)
Try at home

Feel like you’ve grabbed the checkered flag with this creamy concoction that celebrates the Indianapolis 500.
What’s in it: vodka, Drambuie, vanilla simple syrup, cream, muddled mint leaves
Try it at home

This fun cocktail doubles as a craft project and tastes like the Iowa prairie.
What’s in it: cedar rye, lemon juice, lemon thyme syrup, egg white
Try at home

Invented in Lawrence, Kansas, in the 1990s, this drink spices up the standard bourbon and ginger recipe
What’s in it: whiskey (or rye whiskey or a blended whiskey), ginger beer, Angostura bitters
Try at home

Favorite of native son F. Scott Fitzgerald, this drink is a throwback to the days when sugar, juice, and soda were needed to doctor up bathtub gin.
What’s in it: gin, vodka or rum, club soda, sugar, water, lemonade (or lemonade concentrate), limeade (or limeade concentrate), minced mint leaves, lime bitters
Try at home

This smoky, layered take on a whiskey sour was actually Mark Twain’s favorite drink for all occasions. Mark Twain wrote this request to his wife in a letter he penned in 1874.

Livy my darling, I want you to be sure & remember to have, in the bathroom, when I arrive, a bottle of Scotch whisky, a lemon, some crushed sugar, & a bottle of Angostura bitters.

A Midwestern favorite for everything from brunch to tailgating, a close tomato-powered cousin of both Bloody Marys and Micheladas.
What’s in it: ale, tomato juice, Worcestershire sauce, hot sauce, olive juice
Try at home

Named for two regulars at a North Dakota watering hole called the Blue Blazer who’d come to town for the oil industry and demanded a sweet, peppy drink.
What’s in it: coffee liqueur (or creme de cacao), cream, club soda
Try at home

This peanut-butter dream tastes like the confection named after the nut from Ohio’s native tree.
What’s in it: Bailey’s or bourbon, hot chocolate mix, hot water, peanut butter, whipped cream
Try at home

Raise a glass to Mount Rushmore – we won’t tell that this Prohibition-era cocktail got its start in Cuba as a tribute to either Mario García Menoca or Gerardo Machado.
What’s in it: white rum, orange curaçao, dry vermouth, grenadine
Try at home 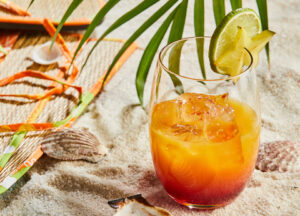 Wisconsin may be known for its beer, but it’s also where the Pink Squirrel was invented. Milwaukee gave birth to this creamy concoction in the 1940s using the state’s other great ingredient – dairy.
What’s in it: crème de noyaux, white crème de cacao, heavy cream
Try at home

Pick your state and its best cocktail and make sure you have the ingredients on hand for New Year’s Eve. Don’t mix your liquor or drinks unless your want to face the New Year with a hardy hangover.