It’s a miracle for a restaurant to make it to year 5 let alone year 50. The median life of a restaurant is 4.5 years and 80 percent of restaurants will close before celebrating their  5-year mark.

Like Tommy Lee Jones and Faye Dunaway, restaurants still performing and making headlines after 50 years deserve a star on Hollywood Walk of Fame or a diner nearby.

Henry Perry, the father of Kansas City BBQ, began Arthur Bryant’s when he started selling smoked meat from a cart in the KC’s garment district downtown in 1908. Arthur Bryant’s then moved to an 18th and Vine location and finally to its location now at 1727 Brooklyn. Arthur, and his brother Charlie, earned the title, King of Ribs. 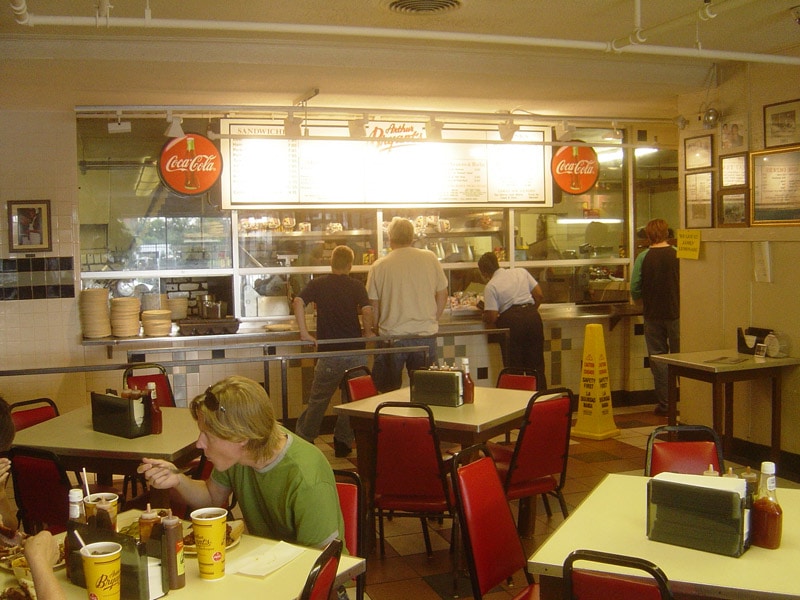 Harry Truman, Jimmy Carter, and Barak Obama have bellied up to a booth at Arthur Bryant’s. We hope Bryant’s will serve presidents and generations to come. What the world need now if barbecue.

She ain’t much to look at on the outside. On the inside, you’ll fall in love with the pecan pie, biscuits and gravy, and salty servers. Dagwood’s ranks #8 as the best breakfast spot in Kansas City, according to FourSquare.  Try an open-face roast beef sandwich for $8.49. The roast beef is a Rosedale community favorite at this old-school diner.

This is a longtime local favorite – a staple for breakfast before work. Just good old-fashioned diner food, nothing fancy. Large portions and the food came out faster than it took to place the order. ~ Lisa

Dixon’s Famous Chili opened in Independence, MO, in 1919, and served bowls of chili to up to 3,000 people a day. People would wait behind barstools three people deep for a bowl of non-tomato-based chili. The family considered adding ketchup to the chili as an insult and began charging a .15 cent fine to anyone ordering it and were known to kick customers out who snuck in their own ketchup.

In 1954, a small neighborhood Italian restaurant and bar was opened in Kansas City by Leonardo Mirabile and his son, Jasper. The restaurant, named Jasper’s, quickly became a popular Kansas City dining spot.

Jasper Sr. was inducted into the DiRONA Restaurant Hall of Fame, one of only 15 restaurateurs in all of North America to be distinguished with such rare honors. Jasper Jr. became the first Kansas City chef chosen to cook at the James Beard House in New York.

When asked what was the family secret to Jasper’s Italian Restaurant’s long-term success, Jasper Mirabile said this.

“You will never leave our restaurant without a MITH — a Mirabile in the house. We are very hands-on just like our father taught us. That’s the only way we know, ” Jasper J. Mirabile Jr.

Nothing fancy, just a little barbecue joint opened by two bootstrapping brother-in-laws in 1935 smoking some of the best-damned barbecue in the city. Place your order, grab a booth and you might find yourself sitting near a concrete worker, congressman, or news crew.

Rosedale doesn’t discriminate. It prides itself in serving all rib loving, finger-lickin’ folk who appreciate slow-cooked brisket, pork, him, turkey, or chicken.

Since the original owner, Anthony Rieke, passed away in 1997, and his wife Alda later in 2002, their daughter Janelle Brown and her husband Bill have taken over the restaurant. Rosedale claims to be KC’s oldest major barbecue restaurant continuously owned and operated by the same family. Come taste greatness and see why Rosedale has been featured in The New Yorker, Midwest Living, Bon Appetit, Gourmet, Saveur, and on The Travel Channel.

When Town Topic first opened in 1937 at 24th and Broadway, it was selling burgers for 5 cents. Today the iconic diner and its twin just one block over on Baltimore continue to melt hearts with their patty melts and milkshakes.

It made America’s 10 Best Burger’s list by Playboy in 2008 and countless other awards, including best Chili by the now-defunct Squire publication in 1987. Drop by when you’re really hungry and order a Truckstop Omelet for $12.45, which includes four eggs, hash browns, and cheese (add meat for $3 upcharge). Make it a late night to see the colorful side of Kansas City.

The Savoy Grill was the oldest continuously operating restaurant in Kansas City, Missouri with its legacy running from 1903 to when it closed in 2014. If the walls could talk they would and they did after 1985 remodel of the hotel into a bed and breakfast.

Boxes were found inside the hotel’s walls that revealed registration records, receipts, and a 1938 Benny Goodman and Count Basie album featuring the song, “Stompin’ at the Savoy.”

Houdini had stayed at the Savoy and was locked inside a phone booth by a prankster. Savoy management freed the escape artist after they heard him kicking and screaming for help. Houdini checked out paying a pittance of $1 for his suite but the damage to his ego caused him never to return to the Savoy.

A post shared by The Savoy at 21c (@thesavoykc)

Modernized but still magnificent — The Savoy Grill ages on.

In 2018, the Savoy reopened under the ownership of 21C Museum and Hotels after a $50 million remodel and transformation. Fortunately, 21c left the terrazzo floor, stained glass windows, and Harry Truman’s Booth No. 4 intact.

How many pan-fried chicken joints can you name with a James Beard and Zagat award on their wall of fame? Stroud’s earned both honors and many more since opening in 1933. It was the first US restaurant to earn the James Beard award in the “Home Style” category.

When you dine at Stroud’s everything is served in big bowls family style. Be prepared to share and pass the mashed potatoes, green beans, gravy, and Stroud’s famous cinnamon rolls.

From its humble beginnings as a pushcart serving pig brains and pig snoots, The Tenderloin grill has become a KC destination for families wanting a great tenderloin or burger. Ricardo Herrera and his family took over the grill in 1974 and dazzled palettes for more than 50 years.

That might have been all she wrote if Minsky’s Pizza Group hadn’t purchased the restaurant in 2022 to keep the griddle grilling. Taste a bit of KC history by ordering a single tenderloin for $6, a double tenderloin with cheese for $9.75, or try a right of passage by ordering a pig snout sandwich for $5.

Anthony’s on Grand (44 years old) Drop by and say hi to Butch, Vino, Michael or Anthony if he’s in town. Anthony’s lounge is one of the best places to relive the 70s.

The Majestic Steakhouse (39 years old) Drop by and order a manhattan float. The Majestic serves them with real ice cream. Sip it slowly while listening to live jazz in the basement. Or head to the 3rd floor to the Pendergast Cigar Lounge, a members-only lounge.

If you love visiting nostalgic and notorious places as much as me, check out my post of the 13 crustiest, oldest dive bars in and around Kansas City.