Before you head out, make sure to check the brewery’s website or Facebook page for hours and availability. Many of these operations are to-go only due to COVID-19. Now take your taste buds on an adventure at these 20 St. Louis craft breweries.

These 20 St. Louis craft breweries are listed in order of barrels produced based on data published in the St. Louis Business Journal.

While known for its Pale Ale, this St. Louis craft brewery serves over 60 styles of beer, including lagers, ciders and barrel-aged delights.

In 1991 Schlafly — St. Louis’s largest craft brewery — brought the artisan brewing style to the city and started a movement that would continue to thrive three decades later. Schlafly, and the numerous craft breweries that followed, helped give beer enthusiasts a choice in a scene dominated by Anheuser-Busch.

Brewing over 60 styles of beer, there’s surely something for every beer drinker. Schlafly distributes to 14 states across the Midwest, so chances are a taste of St. Louis is available near you.

Founded in 2011, 4 Hands Brewing Company wanted to offer more than beer and does just that with its City Wide beers.

4 Hands Brewing Company, located in the LaSalle Park neighborhood, offers an array of creative handcrafted beers, such as its rich Chocolate Milk Stout or its bright blonde ale, Single Speed. Pop into the family-friendly taproom for a taste from a 14-tap draft selection, delicious eats and a few rounds of Skee-Ball.

Two 4 Hands beers pay homage to St. Louis, an eclectic seasonal release, City Museum Pilsner, and its most popular standby, the City Wide American pale ale. City Wide enthusiasts can kick back with a can knowing their drink is giving back. Every case of City Wide sold means $1 back into the St. Louis community. Since 2016, 4 Hands has partnered with 20 nonprofits and given over $200,000 thanks to City Wide fans.

The Zwickel Bavarian Lager, a smooth German classic, is one of Urban Chestnut’s most popular beers. 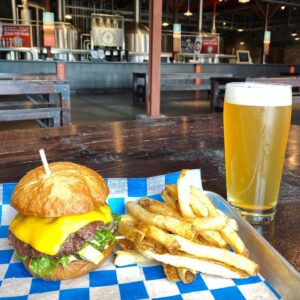 Back in Missouri, part of UCBC’s appeal is its variety of unique spaces to taste its delicious beers and artisan eats. At the original Midtown brewery guests can experience the German biergarten with ample outdoor seating, a selection of beers, and a finger-food menu of pizza and sandwiches. The sizeable UCBC Bierhall sits in The Grove neighborhood and serves up European-inspired fare and a wide variety of beers on tap. Walk across the street to visit the hub of UCBC innovation, the Urban Research Brewery, which serves experimental brews and New York-style pizza by the slice.

If your taste buds are ready for an adventure, Perennial Artisan Ales is your ticket. Using local, seasonal ingredients and brewing in small batches, Perennial isn’t afraid to mix it up with releases like the Grace Hominy Lager, a Mexican-style beer brewed with hominy sourced and cooked by Grace Meat + Three, a local eatery with a southern fare.

The collaboration with Grace Meat + Three isn’t unusual: Perennial regularly partners with other artisan brands in town. Every winter the brewery releases the Sump Coffee Stout, a full-bodied beer brewed with beans roasted by Sump Coffee in St. Louis. Pair Perennial Artisan Ales with delicious dishes from Olive and Oak at Perennial on Lockwood, a brewpub collaboration between two local brands in Webster Groves. The taps feature Perennial favorites alongside experimental brews.

Established in 2009, 2nd Shift Brewing built a following while located in New Haven, Missouri, before making its much-celebrated move to the historic St. Louis Hill neighborhood in 2016. Since then it has continued to wow the city with its innovative brews that are full of character.

2nd Shift has a core lineup that’s offered year-round and includes some of the brewery’s most popular titles, such as Katy (an American Brett saison) and Art of Neurosis (an American IPA). Stay connected with 2nd Shift on social media to catch one of its limited releases, like the pastry imperial stout Nothing But The Pastriest.

The Old Bakery Beer Company offers a food and drink menu with something for everyone.

Pop across the river for a visit to Old Bakery Beer Company, a certified organic craft brewery in Alton, Illinois. While the name says bakery, this eatery and brewery focus on plating seasonal eats with vegetarian and vegan options alongside craft brews. The inclusion of the word bakery pays homage to the building’s long history as a bakery.

Sip on the Citrus Wheat, the brewery’s best-selling beer, or the delightfully Midwestern Ope!, a cream ale brewed with organic corn.

Established in 2015, Six Mile Bridge gets its name from an Irish village of the same moniker, SixMileBridge, that’s known as a stopover for those looking to grab a pint and share a story. One of the brewery’s most popular beers, the Irish Red Ale with Honey, pays tribute to SMB’s Irish-inspired name and is made with wildflower honey. A Bavarian Hefeweizen, French Saison, Irish Stout and Red IPA round out SMB’s year-round lineup.

After closing in March 2020 for renovations, the brewery came back bigger and better than ever in June with an expanded taproom and creative food menu. Check out Six Mile Bridge’s social media to catch its daily chef special.

Side Project Brewing specializes in barrel-aged brews at the intersection of wine and beer. Its Grisette, inspired by Belgian session beers and aged in Missouri oak, was named one of Wine Enthusiast Magazine’s top 25 beers in 2020.

Beer drinkers ready for something out of this world will find it at Earthbound Beer. The microbrewery specializes in experimental ingredients and techniques. Try its flagship beers, Earthbound Blonde and Meteor IPA, or one of its creatively named releases, such as the Jeff Goldplum, a sour brewed with plums, sumac and lemon zest.

A few years ago, the brewing company revived the Cherokee Street Brewing stock house. Stop by for a bite to eat and an innovative brew alongside a piece of St. Louis history.

Established in 2010 as Hill Brewing Company, the brewery changed its name in 2011 to cement its ties to the supportive Ferguson community.

Stop into this Ferguson-based brewery for a classic brewpub dish or handcrafted beer. Two of the brewery’s staples include the Pecan Brown Ale, an American brown ale made with seven different malts, and the St. Louis Pale Ale, brewed with locally grown and Cascade leaf hops. Depending on the day, guests can try one of the brewery’s small batch releases, only available on-tap in the tasting room. Keep an eye on the Ferguson Brewing Company Facebook page to catch these limited-time brews and pop-up food offerings.

Head south of the city to Festus, Missouri, to find family-owned Main & Mill Brewing Company. The brewery and restaurant brought Jefferson County out of the prohibition era as its first commercial brewery in over a century. Its beer lineup features unique flavors like The Goofin’ Hour Cherry Wheat and Apricot Rye.

At Excel Brewing Company, bottled beverages run in the family. Founder Edward Meier bought a bottling machine in 1936 and set up shop in an old family home. What started small has expanded into a full bottling plant for soda and craft beer, though the brewery side of the operation wasn’t established until 2012.

Located across the Mississippi in Breese, Illinois, Excel’s beer is distributed across the greater St. Louis area. Pick up one of the brewery’s most popular brews — Eastside IPA, a hoppy West Coast-style ale — at a store near you.

Beer enthusiasts who love to try something new and unusual will meet their match at Alpha Brewing Company. The South City-based brewery specializes in rare beers as well as sours and barrel-aged options. Try the Peach Pie Funk, a sour blonde ale aged with peaches for 18 months, or a limited release like the I Do Brew, a Belgian-Style Tripel ale made with orange peel and coriander. 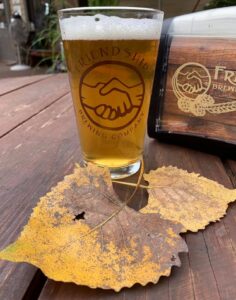 This Wentzville brewery lives up to its name: Friendship Brewing Company thrives on community and camaraderie. With a full kitchen, indoor dining room and large pet-friendly patio, Friendship Brewing is the perfect place to gather with, well, friends.

When it opened in 2016 in a 1900s ice factory, Friendship Brewing Company was Wentzville’s first-ever commercial brewery. The restaurant and brewery offers 25 taps featuring both Friendship beers and brews from other friends around the country and world.

Friendship serves up more traditional beer as well as creative combinations and seasonal treats, such as its Thanksgiving Flight with a turkey leg, stuffing, cranberry cider and pecan pie beers. One of its most popular brews, Andrew’s Ale, pays tribute to local Andrew Norton, who had Prader-Willi Syndrome, and the nonprofit created in his name, Andrew’s Hugs.

#15 Square One Brewery and Distillery

Square One brings distilling, brewing and cooking under one roof to create a variety of innovative flavors both in the glass and on the plate. Brewing and distilling meet with Square One’s Barrel-Aged Barley Wine, an imperial aged in a malt whiskey cask. Try a hoppier route with the White IPA, a fruit-forward ale with a Belgian Wit malt profile.

Located in Lafayette Square, the brewery and distillery lives in a building that dates back to 1883, when the property was a tavern. After over a century of different tenants, the brewery says it’s bringing the historic corner back to square one.

Missouri Beer Company offers a craft beer for every kind of palate. Try the popular Kolsch, a traditional German ale, or the Eastern MO IPA, a Missouri take on the New England IPA style. MBC even serves up its own hard seltzer at its O’Fallon taproom.

While MBC makes craft beer of its own, it offers a variety of events and opportunities to experience other artisan makers in the area. The brewery regularly teams up with Big V’s Craft BBQ and hosts local bands for live music.

St. Peter’s first brewery offers a wide variety of beer styles sure to please any craft beer enthusiast or newbie. The Enter Sandman, one of Third Wheel Brewing’s most popular beers, is a red ale with sweet notes and a spicy finish. Pair Third Wheel drinks with The Window Kitchen eats at the brewery’s attached restaurant partner.

There’s always something happening at Third Wheel’s taproom and patio: Thursdays are for Beer Bingo, and Sundays mean live bluegrass. Keep an eye on the brewery’s Facebook page for other special events, like its annual Mardi Gras party or Oktoberfest.

At Two Plumbers Brewery and Arcade, innovative brews pair with a slice of pizza and a big serving of nostalgia. The self-proclaimed nano brewery features a variety of pinball machines and classic cabinet games, such as Pong, Mrs. Pac Man and Galaga.

As for the beers, try the Blue vs Red cider, made with blueberries and pomegranate, or the popular Pauline Blonde Ale, an easy-drinking light beer.

Headed to see the Blues? Make Center Ice Brewery part of your pre-game ritual. Located near the Enterprise Center in Midtown, two St. Louis favorites — craft beer and hockey — meet in the Blues-themed bar. The brewery even offers a free shuttle to and from the arena on game days.

Center Ice pays tribute to the St. Louis Arena, the former home of the Blues, with wood and other old arena elements in the brewery’s interior. The Old Arena Lager, what Center Ice calls “beer-flavored beer,” offers a taste of the Blues legacy and is on tap in the Enterprise Center.

Rockwell Beer Company knows variety is the spice of life. Housed in modified shipping containers in the Forest Park Southeast neighborhood, the craft brewery keeps its brews fresh and fun with releases like Polymath, a spelt foeder saison barrel-aged in Missouri white oak, and Boombox Generation, a nostalgic cream ale.

Learn about the best craft beers in Kansas City. Cheers! 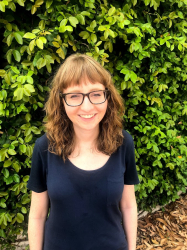 Lauren Miers
Lauren is a Midwest-based freelance writer fueled by decaf coffee. When she's not writing, you can find her mapping out her next adventure, solving puzzles (both jigsaw and otherwise) and immersing herself in a good book.