The City of Fountains (aka Kansas City) runneth over with water festivals, waterfalls, and notorious watering holes to visit this fall.

Kansas City doesn’t have a coastline, but it does have 11 metro lakes, 10 waterfalls, three annual water festivals, and 200 fountains to enjoy. Kansas City also has the Missouri River, the longest river in North America, running right through it.

There’s something about water that naturally draws us in and fascinates us. So, pack your weekend bag and let’s dive into the 12 recommendations to make your  Kansas City visit wet, wonderful and memorable.

Thousands have lived without love, not one without water.

Excelsior Springs is the home of healing mineral waters discovered back in the 1800s. Excelsior Springs’ famed Elms Hotel and Spa is the perfect place to heal your aches and woes and serve as a home base for your weekend of sightseeing.

Excelsior Springs is just an hour north of Kansas City. Book the ultra-affordable Rise and Dine package for $106 a night so you can fuel up on a nice breakfast before you head out.

If you want to be pampered, book a higher-priced package that includes spa treatments, paranormal tours and dinner in the 88 At The Elms. The upscale restaurant offers filet mignon, ribeye, pork shoulder and salmon along with lighter fare and sandwiches.

Here’s a mini-history lesson about the wonder and resilience of the Elms. The first Elms Hotel and Spa was constructed in 1888, but it burned down. The second Elms Hotel was built in 1908. It attracted guests by train from all over the country. Unfortunately, the second Elms burned down in 1910 and yet again reopened in 1912.

The resort is constructed of native limestone and boasting grand ballrooms and an inviting veranda. Thanks to a 20 million renovation in 1998, the Elms continues to attract water lovers and spa seekers.

Harry S. Truman stayed at the Elms in 1948 to escape the stress of the democratic election. He enjoyed a salt scrub, mineral soak and massage. The following day, he made his acceptance speech in downtown Kansas City without any knots in his shoulders or back.

Today the Elms delivers solitude, spa treatments, ghost tours and a 14-minute walk to the Hall of Waters, which is the second stop on your Kansas City water immersion getaway.

#2: Visit the Hall of Waters

The Halls of Waters marks the spot where the first springs were discovered in Excelsior Springs back in the 1880s. The Hall of Waters is also where I learned how to swim in its once operable salt water Olympic size pool on the ground level.

Excelsior Springs was built on about 40 different wells and springs of water naturally fortified with minerals such as calcium, saline, and iron-manganese. The Hall of Waters’s purpose was to make all of them accessible together in one place. People would come from miles around to drink and bathe in the water, which was once believed to treat and heal various ailments from polio to rheumatism.

Today the Hall of Waters is part of City Hall. The mineral water bar no longer serves spring water, but you can buy a postcard and learn more history from kiosk stations.

Wabash BBQ in Excelsior Springs is known for its smoked meats and award-winning ribs and chicken. It’s owned by my high school classmate Jim McCollough who will treat you like family. Swing by Wabash for a slab of ribs and sides to enjoy during your visit to Tryst Falls Park.

Tryst Falls is one of the only natural waterfalls in the area. Some people call it the baby waterfall because it measures just less than six feet tall. Many kids and adults have jumped off the fall for pure pleasure, including myself. Jumping off the falls is against park rules. Look, drool, propose, but don’t jump.

Head to the Briarcliff neighborhood just north of the river and to Briarcliff Waterfall Park. There you’ll spot a stunning man-made fountain that backs up to million-dollar homes in a subdivision called Palisades (check out the fountain entrance to the neighborhood, too). Because Briarcliff waterfall serves as an elegant backdrop, the waterfall attracts thousands of wedding parties and prom-goers annually. Take a couple of stunning selfies, then head to the corner of N. Oak Trafficway and Vivion to see the Northland Fountain in Anita B. Gorman Park. The fountain is also called the Spirit of Cooperation.

The Northland Fountain is amazing year-round, but most remarkable during the winter when it forms into a blue igloo-shaped sculpture.  It’s one of three fountains that run year-round. The fountain’s 80′ circular base contains a center geyser that can propel water to a height of 35 feet.

The fountain’s allure makes a perfect accent piece for a wedding or special event. Park rentals start at just $1225 for 50 guests.

The Henry Wollman Bloch Fountain is the exclamation point in front of Union Station. The Bloch Fountain features 232 water jets that present a choreographed show every hour and half-hour for five minutes.

The fountain was designed by WET Design, the designers of the Bellagio fountains in Las Vegas. The fountain was gifted to Kansas City in 2001 in the name of the co-founder of H&R Block.

While you’re there, go inside Union Station to marvel at the architecture and enjoy a pastry and cup of coffee at Parisi Coffee.

Inside the beautiful Nelson-Atkins Museum is Rozzelle Court – a stunning place to enjoy lunch or dinner. The open courtyard is fashioned in 15th-century Italian renaissance style and was enclosed in 1981. It was named after museum benefactor William Rockhill Nelson’s attorney – Frank Rozzelle.

The fountain in the center of Rozzelle Court is the star and the oldest fountain in Kansas City, dating back to 220 A.D.

The museum purchased the marble bowl from Italy in 1931.  The fountain’s pedestal was installed in 1933. The serenity visitors feel each time they visit is timeless.

#7:  Take the City of Fountains Tour

The popular Kansas City tagline, the “City of Fountains,” started in the late 1950s and early 60s, when two significant fountains were dedicated to Kansas City.

Today there are 200 officially registered fountains in the Greater Kansas City area…more than the city of Rome. You can take a virtual tour online here or a walking tour of the fountains in the Country Club Plaza. Download the KC Fountains Brochure here.

#8:  Go to a Water Lantern Festival

Each June Excelsior Springs hosts a water fest in its downtown. Flooding caused this year’s event to be canceled, which is both ironic and cruel. However, you still have two other water fest opportunities to pick from.

The Kansas City Water Lantern Festival is on September 18. Tickets are $25 and include a lantern and an evening of fun.

The Moon and Water Lantern Festival in Shawnee Mission Park is on October 2. The event is sponsored by the Kansas City Chinese Association and is held to honor Chinese culture and the homesickness many immigrants feel after moving to America.

The water lantern, also known as the river lantern, originated in the early years of the Ming Dynasty. Come enjoy a colorful Mid-Autumn Festival night and an abundance of large-scale water lanterns covered in well wishes and affirmations. Tickets are $8.

The Missouri River, also known as the muddy MO, is what brought traders and settlers to Kansas City’s shorelines in the first place. The Missouri River is iconic and provides an immersive experience by kayak.

KC Kayak and Canoe provides a one-hour KC Bridge Tour for $30 per person or its Mile Manic package, which is 4.5 hours for $50 per person.

Almost without fail, first-time paddlers on the Missouri River find themselves relaxing within minutes, as the intimidation felt from shore simply melts away.

If you’re hardcore, sign up to participate in the Missouri River 340. It is a 340-mile kayak and canoe race from Kansas City, Kansas to St. Charles, Missouri, that follows the Missouri River. It is the longest continuous canoe and kayak marathon in North America besides the Yukon 1000, and possibly the world.

Floating in a tank of 850 pounds of Epson salt and water has proven to be good for the mind, body and skin. First, you step into a stimulation-free environment, far far away from all the noise of the world for one hour. Then you lighten your mental and physical load by literally floating in 12 inches of saltwater.

FloatingKC in south Kansas City and the Spa at Briarcliff in the Northland offer salt tank therapy. A single float will run you $65-$75. When you consider the result of free-floating for 1-hour is the equivalent of a talk therapy session, massage and hot tub soak, the price is well worth it.

Tom Pendergast was a democratic political boss who ruled Kansas City from 1925 to 1939.  In honor of Boss Tom, Tom’s Distillery opened a bar and distillery downtown Kansas City called Tom’s Town. You’ll know you’ve arrived when you see the mural on the side of the building that reads, “The People Are Thirsty.”

When Oceans of Fun opened in Kansas City in 1982 it was the largest water park in the world. Today one pass gets you into both Worlds of Fun and Oceans of Fun so you can enjoy 64 rides, slides and 33 dining locations, including the Cotton Blossom BBQ restaurant. 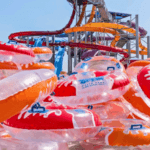 Proudly powered by WordPress and Listable by Pixelgrade.